Welcome back my lovelies! I apologize for putting that awful Disney song in your head, but it seems appropriate with this first painted mini I wanted to put up, my Siren Maneater: 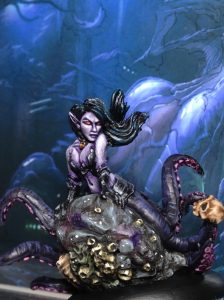 This beautiful resin miniature is from a game called Deep Wars by AntiMatter Games Which is a small scale skirmish game set “in the watery abyss” and a sister game to Shadowsea. I recently picked up this little gem and another miniature by way of their Blood Reef Kickstarter campaign, and I’m thoroughly in love with the miniatures. The Siren Maneater is a personality character from the Dark Mariners faction, who are I think my favorite faction in the game. She essentially disables enemy models with her siren song which then allows the heavy hitters to move in and wreak havoc. Lots of tentacles, barnacles and slithery Cthulhuesque goodness in this group for sure. I picked up 3 other creatures from this group which I’ll be painting shortly and then I’ll have a playable 300 point force 🙂 I’m really looking forward to making the gaming surface for this too, as most of the items will be from the local pet stores aquarium section!

Now, I’m sure you’ve all probably seen/heard that GW have recently released some new Sisters of Battle miniatures (what the whaaat?), comprising of an $80 box set of Celestine, 2 ‘Geminae’ Seraphim and some big Mechanicus monstrosity; as well as a ‘resin’ Canoness Veridyan. Veridyan is a faithful reproduction of the iconic battle sister as envisioned by John Blanche. Despite my pretty much ignoring GW and their nonsense for the last few years, I was pretty giddy when I saw a leaked picture of Veridyan on my Instagram feed. Then a week or so later I saw leaked pictures of the Triumvirate set and was beside myself with excitement. Had GW finally got their sh!t together and started moving forward with a re-visioned Adepta Sororitas force? Well, the jury is still out on that, as it seems that the Sisters still only have metal miniatures available outside of those I listed above, so thanks GW for giving us sisters supporters some serious blue balls. I guess it’s a step in the right direction, but I’m really hoping these couple of releases aren’t it… If that’s the case, I’ll just look forward to Adeptus Titanicus and the new version of Epic coming out later this year.

Harsh feelings for GW aside (they DO seem to be pulling their socks up lately, and I did pick up last month’s White Dwarf and actually enjoyed it), I bought the Canoness miniature (which still made me grimace at $25). I still can’t find it in myself to drop $80 on the box set with something in I won’t need. I guess I could go halvsies with someone though I suppose.

I’m a little nervous about the material they’ve used for this figure. It seems awfully close to Finecast, and some of the pieces (like the sword blade) are super flexible. 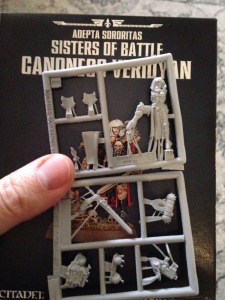 One of the things that kinda jars me about this miniature is the pose. I understand that this is a rendition of the John Blanche painting, but I’d have used a little artistic license on the leg that’s up on the stack of bones. It looks awkward and  unnatural, unlike the painting, which works because her legs are a lot more slender. A minor gripe, really. I’m excited to add this to my Sisters force, and I did wonder whether I should paint her the same as the original, or paint her in my army’s colors? I guess her get up is probably her signature gear so stay true to the original, right?

That’s it for now, I’ll be posting again very soon!

So, I have finally finished the first Battle Sister of my order, The Ancient Order of the Exalted Saint. The colors are essentially the same as the Protectorate of Menoth, but hey, they are all religious zealots, are they not? The photos are a little blurry, as my GF’s camera seems to be playing games. Plus the lighting seems very ‘orangy’, even though I had 2 lamps right up close. I guess i’ll have to experiment more. Now I have the scheme sorted out, hopefully the rest of the squad should be a whole lot easier to do.  See what you think: