Had a really fun game of Flames of War about a week ago against my arch nemesis Colin. Once again his German forces tried to overthrow the British lines, but to no avail. One thing that scares me witless are those bloody tanks that the Jerrys have, and they made short work of my Sherman armored divisions (I really need to try some other tanks!). I responded in kind with some ruthless artillery strikes (which weren’t always that great, but when they hit, they hit hard!). Also, infantry assaults on tanks are a lot of fun…

Infantry that are dug in are great for holding ground, and are a pain in the arse to get rid of. Colin did whittle down some of my rifle platoons, but true to their nickname of the British Bulldogs, they gave the Hun no quarter.

This was our first game in probably almost 2 years, and we were both relearning the game as the new rule set is out. I have to say that the game seems to flow a little better with this new set, and I thoroughly enjoyed it.

In other news, I painted up Beastman that I received from Quest Miniatures. I went with the FILMation colors and am really pleased with the results. I used a white undercoat as the colors were going to be primarily brighter than I normally paint, and I forgot how much fun it is to be painting in a vibrant palette. Years and years of painting ‘mighty grimdark’ 40K stuff got me undercoating nearly everything in black. Anyway, here he is:

And finally, I finished another ORC Trooper for my PanOceania Infinity force. I was inspired by Priss from Bubblegum Crisis for the colors, and I think I’m going to get 3 more ORC troopers and paint them up in the other Knight Sabers colors. Infinity is basically a Manga skirmish game after all… 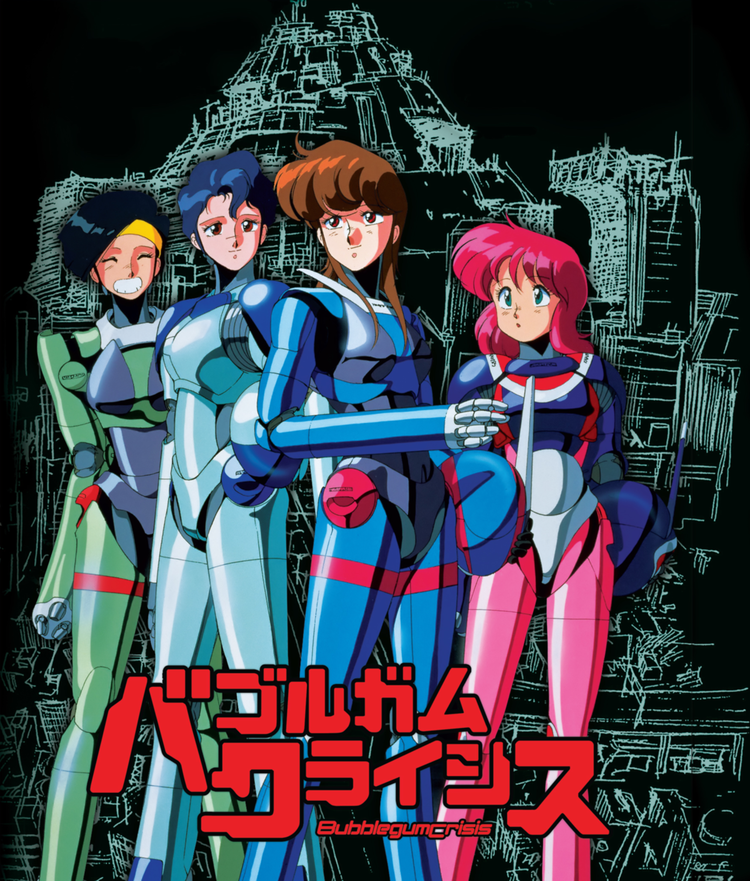 Well bloody hell, November already? was July really the last time I posted on here? Yikes. I really need to take a little WCF time out here and there a little more regularly.

While I may not post a lot on here, I do still do a lot of painting and gaming (I really hate the term “hobbying” which seems to be the term that GW have made their own). I haven’t picked up a Space Marine in forever, and strangely I haven’t missed it one bit. Instead, I raided the ‘drawers of shame’* and pulled out some miniatures that thought they would never see a bristle or a drop of paint. First up? Cybermen!

Classic Tom Baker era Cybermen from Blacktree Miniatures. They’re sort of whimsical, and charming in their own way. The proportions are a little off, but they only took literally minutes to paint. I think the bases took longer! I have some more to do, including some later era (from about the time of Earthshock/Silver Nemesis) which will be getting the treatment shortly.

Staying on the Doctor Who theme, I painted up ‘my’ Doctor, Sylvester McCoy, the 7th Doctor. Now, recently I had molded and cast a TARDIS from the old Dinky Toys die cast metal toy (available from Lord Chaos Creations ) . I cast a bunch up in resin, and thought I’d paint one up, as it’s almost perfect scale wise for wargaming miniatures, check it out:

I have a bunch of the metal Daleks to paint up as well. I’m thinking of incorporating them into my Judge Dredd game as illegal alien entities. Might be fun to have the judges of Mega City One square off against Daleks and Cybermen!

Speaking of the Judge Dredd game, I picked up a Chronoscope miniature that I thought would be quite good to throw in as a street punk, but as I completed her, I thought she seemed more disciplined than that, and have since decided to use her as a Wally Squad Judge (Wally Squad – under cover cop). Reaper make some beautiful figures and I’ll be picking up some more to add to the denizens of Mega City One: 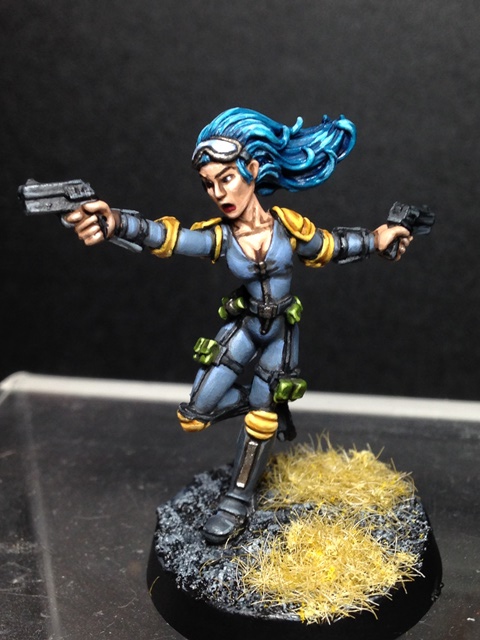 And, with us just celebrating Halloween, I painted this cheeky little number up as a gift for my wife: 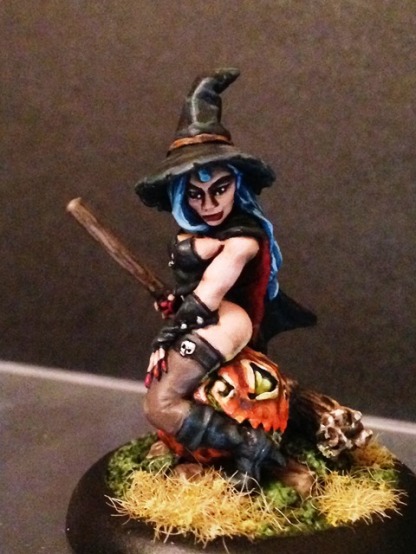 I’ve also picked up some new units for my late war British forces for Flames of War, a Commando Platoon and an accompanying mortar platoon. No paint on those yet, but I’ll have another update soon (promise!).

I’ve been having a lot of fun just picking random miniatures to paint, it’s bought a little of the excitement back, unlike looking at ranks and ranks of >insert your pain point of choice here< and thinking AARGH! I also recently picked up a Keeper rulebook for Call of Cthulhu too, and have been devouring the contents ever since. I’m going to have my first game very soon. I’ve never been a GM/Keeper before, so this should be interesting… gulp!

*Drawers of Shame – draw with unpainted miniatures. Not an underwear drawer with speedos in.

Flames of War… the 15mm wargame set in the World War 2 era. Dethtron started getting interested in this a while back, and his infectious enthusiasm was hard to ignore. He’d already decided on playing the (later war) German forces (Achtung!), and well, with me being a Brit, who else would I play? Of course! the Russians!

Only joking :). I had to fly the flag for my country and opted to play the Tommys. I haven’t really had much time to get the ball rolling with this, although I have played a few games (playing the American forces) and it is super enjoyable. I have managed to knock out a bunch of rifle platoon stands, but I just finished the first of eight artillery pieces, which i’m quite pleased with.

To those of you who don’t know me outside of this ‘ere blog, I live in the US, but am a born and bred Limey. I am from Coventry, which has quite significant ties to the whole WW2 thing, in that our city had major factories that produced ordnance for the war effort for Allied forces and also produced tanks and armor at the Alvis factories that were based there. The Luftwaffe also managed to obliterate our medieval cathedral in an air raid (known as the Coventry Blitz). They were actually trying to get the aforementioned factories but missed… The walls of the old cathedral still stand, with the new one built next to it. It’s quite impressive to behold. As a side note, I’ll be getting married later this year about 30 feet away from the old part of Coventry Cathedral 🙂

Both of my Grandfathers served in the war, one in the Corps of Engineers, and the other a Sergeant in a regiment that served in North African Theater. I’ll be doing a bit of research on them for a later article 😉

The satisfying thing about painting FoW, is that it happens so quickly. I basecoat everything and simply slap a wash over it, apply some matt varnish, and done! I’ve seen people really go to town highlighting 15mm minis, and while it’s an art unto itself, I feel it can sometimes ‘drown’ the miniature. Keep it simple, less is more. 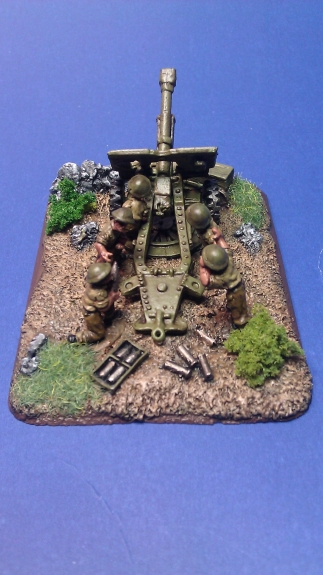 Now that i’ve found a ‘groove’ with painting this stuff, I hope to be able to rattle out the rest in double quick time so I can keep those bleedin’ Germans occupied!

Yes, it’s true. I haven’t picked up a paint brush in a few weeks now… That pesky thing called ‘real life’ keeps getting in the way. Inbetween remodelling my bathroom, birthdays, financial/work related stress, consistent travelling to the future-in-laws and then a double whammy of being told that my home is now worth only 50% of what I paid for it, painting has been far from my mind. Actually, not strictly true. I just finished ‘Age of Darkness’ in the Horus Heresy series, and wasted no time in starting the Blood Angels omnibus. I’ve actually wanted to be painting, but just could not be arsed to do it. Oh, and then there was that other small distraction that I have had lately – playing Space Marine on the Xbox. How frakkin’ good is that game? i’m addicted!! I was getting a little bored of just dealing with greenskins and got a total nerd boner when frakkin Chaos marines turned up, even some Blight Drones! So, I guess in a sorta roundabout way, I have been keeping my hand in the hobby… sorta…

Although I haven’t been committing brush to miniature, I have been constructing. I based up a bunch of my Flames of War chaps on some sweet scenic bases that Gale Force 9 recently put out. I also assembled my Wolf Priest for my fledgling Space Wolves force and I also picked up the Finecast Emperors Champion, which I felt needed a little extra ‘something’.

I lucked out again, as it seems that this mini had no issues in the quality control area, so assembly was a snap (and thankfully nothing snapped). I decided to put him on a scenic base, rather than a standard one and add sand. I dug around in my bits drawer and found a MicroArt Studios base which I thought would do the trick nicely. I pinned him to the base, putting a little hint of an angle in there to hopefully give the image of movement. He is stepping forward and I wanted it to look as though he was going to step over the piece of ruin on the base.

Given the medieval feel of the Black Templars, and especially this miniature, I felt that he was missing something. I find it hard to believe that this guy would just march out into a battlefield without some other form of protection other than his battle plate. So, I gave him a shield. This was from the Scibor range of 40K friendly accoutrements. It’s big, and it fits the image perfectly, so, I cut off his hand and repositioned it, then added the shield. I made a green stuff handle as well, to make it look like he’s actually holding it:

I know it’s not a game legal piece of kit, but for decorate purposes I think it looks bad ass. I’m hoping to make a start on him this weekend, but we’ll see…