I think it goes without saying that being in this hobby we all come to that point sooner or later where we have amassed a ‘Pile of Shame’ – that drawer/box/cupboard/closet/storage unit that has a literal mound of unpainted miniatures and vehicle and scenery kits. This is not to say that you don’t have  plans for them and that you’re just buying up lots of plastic or metal for the sake of it (or maybe some of you do? hey, I’m not here to judge).  We as gamers (for the most part) suffer from the OITNS or “Ooooh, It’s The New Shiny”, and it’s very easy to fall into this. With the number of new games, companies, Kickstarter campaigns, new releases etc growing exponentially it’s very easy to get blown around by the winds of change (maybe Tzeentch has a hand in this?). There is SO MUCH cool stuff on the market now, it’s hard to turn around and walk away (I’m guilty of this for sure).

All this aside, I was watching a Tabletop Minions video on YouTube on the train ride home from work the other day, and Uncle Atom hit on this very subject. Take a few minutes out and watch the video below >pa-CHOW<

Uncle Atom certainly hits on some interesting points for sure. I’ve recently been on a bit of a purge through my Pile of Shame and took a bunch of stuff  to my FLGS to trade in for store credit (Sisters of Battle – 2019, remember? Speculating to accumulate baby!). I had begun to feel a level of anxiety every time I went into the Nerd Closet, being greeted by lots and lots and lots of unpainted or undercoated miniatures staring back at me.  It was then I realized that this is a hobby, and it shouldn’t be making me feel crappy and down about having so much gathering dust. So, as well as cashing in a bunch of Forge World items and some other guff, I thought to myself “how can I start chugging through and get some momentum going with painting this stuff?”. It presented a set of challenges in that I needed to prioritize what games I was playing and the frequency of those games. At the moment I play almost exclusively Infinity, but then I thought “well, I’m going to get burnout if I’m painting nothing but Infinity miniatures”. So with this in mind I approached it from a different angle.

The D20 Table was basically an idea I had to make the selection process for my painting a little bit more fun, and to enforce some variation to keep the interest going. It’s a simple idea, I created a table in Excel with twenty line items which are all minis from games that I play/are about to play. The 1-20 obviously corresponds to the dice roll that randomly selects what i’ll be painting next. I’ve been using it for the last few weeks, and here is what I have struck from the list so far: 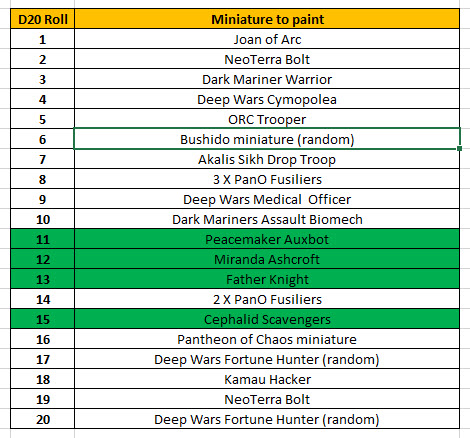 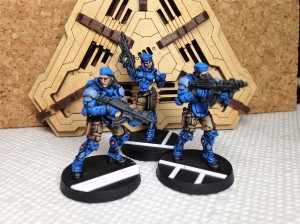 It’s given me a hand with wanting to get my minis painted, and it feels good to strike another line off the list. I get either my son or my wife to roll the dice, so they actually become a little invested how their ‘selection’ is coming along. The other thing that has helped is to make a conscious decision to paint to a decent tabletop standard. The Fusiliers above have taken maybe about 5 hours from start to this point, with maybe  a half hour left in them to paint the bases and varnish them. It almost felt like a weight being lifted from my shoulders when I told myself that not every single miniature needs to have 10-15 hours spent on it, as that would be when the hammer blow came in and I’d get the burnout when I look at the tons of other stuff I had to wade through.

I feel that stocking up (I won’t use the term hoarder) and burnout/fatigue can go hand in hand, so I’m really trying to make an effort to knock some effing great holes in my inventory over the coming year, so this will be an ongoing saga. I hope that you’ll join me on my journey.

I’d love to hear any comments on how any of you combat the burnout, or the Pile of Shame in the comments below. Thanks for reading!