Welcome everyone! Today’s post is by my good buddy Matt Crump. Matt has become somewhat of my ‘Oldhammer’ go-to guy as he loves to delve into his archives and unearth something from the vaults. Those of you who got into Games Workshop around the time of Rogue Trader will be well familiar with Matt’s offering today, and even if you’re relatively new, sit back and enjoy a look at times past…

END_OF_DOCUMENT_TOKEN_TO_BE_REPLACED

This week my brother-from-another-mother Matt will be leading the charge, and for that I am grateful as work has been a little hectic! In this article Matt takes a trip down memory lane to the days of yore and the era of Space Crusade and Robocop which prompted the decision for the latest model he painted for his collection. Matt, over to you squire!

END_OF_DOCUMENT_TOKEN_TO_BE_REPLACED

Squats… Stunties… Space Dwarfs (Dwarves??)… you may remember these half-barreled sized denizens of the Imperium from the early days of 40K. Or not, I can’t comment. I remember thinking that these little characters were a little odd, and were honestly never my cup of tea but Your Mileage May Vary.

END_OF_DOCUMENT_TOKEN_TO_BE_REPLACED

Going through my drawers the other day (not my pants) I found an old back issue copy of White Dwarf. And by old, I don’t mean from the time in the mid-late 90s when GW were painting everything in various shades of red, no I’m talking about an issue from the 80s, July 1986 to be precise, so I thought I would take a look through and do a retrospective of sorts. Sit back in your armchair by the fire and grab a cup of hot chocolate while we fire up the WayBackWhen machine >cue TARDIS like noises<.

Right off the bat: The cover. There is the silhouette of the White Dwarf next to the title, then the subtitle: “The Role-Playing Games Monthly”, say whaaaat? Haha!

Then the artwork… I must say that this painting has always been a favorite of mine, right from when I first saw it in the Warhammer Fantasy Battle book. Titled ‘Amazonia Gothique’ by Games Workshop alumni John Blanche; it is a glorious, over-the-top image of a female chaos warrior, beautiful but deadly, and with some stunning, well maintained hair… I remember when I was in secondary school I painstakingly copied this image onto my art folder, not in full color, but lovingly shaded with pencil. I always loved the contrast of the green armor, the shock of white hair and the deep oranges in the sky. This remains a favorite of mine, and I would love to own a print of it so I could frame it.

Which reminds me… I must try and track down the miniature GW made of this, there were two versions IIRC? Actually, never mind, I just saw how much they are going for on EvilBay… ugh!

Now anyone here who’s old enough will remember that GeeDubya used to make miniatures and games for a whole plethora of other licenses. Judge Dredd? Yep! Doctor Who? Yep! Random assorted characters and beasties for roleplaying games? Well.. yep! As the risk of sounding like a totally old fart, I’ll go ahead and say that those were the “good old days” – back when a pack of 4 or 5 metal miniatures would set you back a whopping £1.95 (nearly $3?). But anyway, I’m not here to talk about prices! This issue of WD (which was typical of the magazine at the time) has a veritable mountain of stuff inside, including: 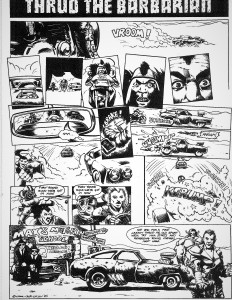 I LOVE looking through the old ads in the vintage WD magazines. These were the times that you would see an ad for Grenadier Miniatures on one page and then a GW ad on the next page touting their new releases, which where, in this issue, new figures for AD&D, Judge Dredd, their Samurai/Oriental Heroes range and then of course, the Machineries of Destruction:

Very sheckshy, yesh Mish Moneypenny? I remember the first war machine I ever had was the Goblobber. There was something to be said about those old box sets and figures, so I’ll post these up as well for you to all drool over:

Looking at White Dwarf now compared to then, well, there really is no comparison. They are similar in name alone. Over the years Games Workshop moved from a small indie business finding its feet and it’s fanbase to one of, if not the miniature gaming powerhouse it is today. Gone is the need to pay for the magazine through selling ad space to other competitors, or giving prime real estate to games systems that belonged to other companies, or even making figures for those systems. No, they have severed their ties to all that and become a hulking behemoth that only needs to worry about pushing their new goodies on the masses. I’m not knocking that at all, I mean, let’s face it, it’s a testament to their success, right? I just like to look back in time when it was obvious that the crew that ran GW at that time wore their influences on their sleeves, and supported all the things that they were interested in through their mouthpiece which was White Dwarf. (On a side note, I saw an ad for Bolt Thrower’s album ‘Realm of Chaos’ in another back issue. Those were the days!!!)

Nostalgia is a strong emotion, and looking through these old back issues is a trip down memory lane for sure. I hope you enjoy these images (used without permission) as much as I do!

I’m a grumpy old goat at the best of times (and I’m totally OK with that), so it takes a lot in this hobby for me to get giddy like a fanboi, but discovering this Kickstarter campaign on Tabletop Gaming News did exactly that. For those of you who are of the golden years of GW (around the time when 40K was Rogue trader and the 2 Chaos supplements didn’t cost you an arm and a leg), you should take a look at the Pantheons of Chaos project. As soon as I saw this I was hit by the nostalgiahammer pretty bloody hard. Not only because of the damn awesomeness of the minis, but because they’ve pretty much stepped out of the pages of those early tomes. Project master Diego Serrate Pinilla is very obviously a fan from the old days, and this project will appeal to all those other ‘old skool’ vets like us out there. The sculpts he and his team have shown on here are just bloody brilliant. It also helps that Tony Ackland who was responsible for a large portion of the art in those books is helping with the project, as well as Kev ‘Goblinmaster’ Adams and Tim Prow. I mean, seriously, Oldhammer!!!!! Go, take a look, revel in their magnificent glory, and by the gods SUPPORT! The project was fully funded in under 2 hours (what does that tell you?) but they still have 16 days left to go with plenty of stretch goals and other goodies in the works. I’m very happy I backed this, now I have to be patient and wait for them to arrive. That’s not going to be easy…