I know nothing at all about Infinity. I heard it was a complex game to master, but once you had it down, it could be quite a riot. I never really paid it much attention, that is, until this year’s Adepticon. Totally blown away by some of the display pieces I was eyeballing there, as well as the fantastic miniatures, I came away feeling kinda how I did when I first discovered the hobby – quite giddy!

I joined up with the official forums to cruise and see what the deal is with this game and the universe that it is set in, and seeing the very anime-inspired touches throughout the whole thing got me well and truly fired up. Bubblegum Crisis is one of my favorite Japanese animations, and for those of you who don’t know what the hell I’m talking about, educate yourself for a moment:

What more do you need than five gals kicking cybernetic ass in powered armor against the soundtrack of 80’s Japanese rock music? not much. It’s very obvious that Infinity borrows very heavily from this genre, and I’m totally OK with that. It certainly makes for a refreshing change.

Recently I scored some Bubblegum Crisis miniatures on Ebay from the now defunct company Animail who for a short period of time in the early 90’s was releasing licensed metal miniatures from various properties. Here are the gals in all their unpainted glory:

…and one of them painted up: 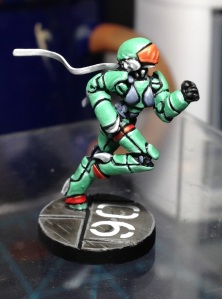 You can see that there are some similarities between the Knight Sabres and the ORC Troopers from Infinity: 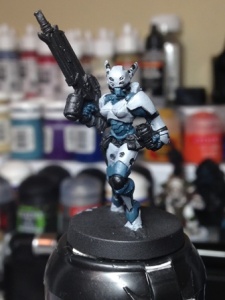 So anyway, These are my first tentative steps on the road to Infinity (there is a song in there somewhere I’m sure). I picked up the 2nd edition rulebook to get a handle on the world and the fluff. I’m hoping to pick up the new starter box set in the next few weeks. Looks like for now my army is going to be PanOceania. Now I just have to figure out putting the army lists together… Anyone out there have anything they can tell me about the game that a n00b should know in the early days?

Thanks for checking out my post about nothing lol!

This site uses Akismet to reduce spam. Learn how your comment data is processed.